Dr. Leonard Horowitz Warned You First Not to Suffer from the 2017-18 Vaccination Genocide. Now CDC Tacitly Admits He was Right!

(based on a recorded interview with Dr. Horowitz)

Las Vegas, NV (12-29-17). Two months after Dr. Leonard Horowitz warned not to take the 2017-18 flu shot due to high risks and contrived benefits, the CDC has come out with a virtual admission that this world’s most censored vaccine industry whistleblower is right, again.

In a deceptive article widely circulated by the corporate-controlled media titled “Flu sea­son off to deadly start in state,” Big Pharma’s yellow presses advertised anti-viral meds rather than risking this year’s poisonous flu vaccine that they previously encouraged.

In law, evading, neglecting, or omitting a claim filed against your product or service is called a “tacit admission.” Tacit admissions are accepted as evidence against the defendant. In this case, the CDC and allied “pharmawhores” (i.e., medical deities that prostitute their professional reputations to sell whatever dope they are bribed to pitch) evidenced their own fraud and sickening crime.

“This year’s flu sea­son may be a real headache, in part be­cause the vac­cine con­tained in flu shots is much less ef­fec­tive against the most se­vere form of in­fluenza ­ a strain known as H3N2, which has been dom­i­nant so far this sea­son,” read the national news release.

Dr. Horowitz, the award-winning filmmaker of UN-VAXXED: A Docu-commentary for Robert De Niro, warned on November 8, 2017 that the new flu he called the “Aussie Flu 2017” was horrible, and he urged everyone to stockpile OxySilver and avoid getting the dangerous vaccines laced with GMOs.

“Health care ex­perts in Aus­tralia, which suf­fers through its flu sea­son from June through Au­gust, found that flu shots were only 10 per­cent ef­fec­tive in pre­vent­ing H3N2 in­fluenza there,” the news reports stated. “It’s un­clear if the vac­cine in the U.S. will have sim­i­lar dif­fi­culty in stop­ping the virus.” 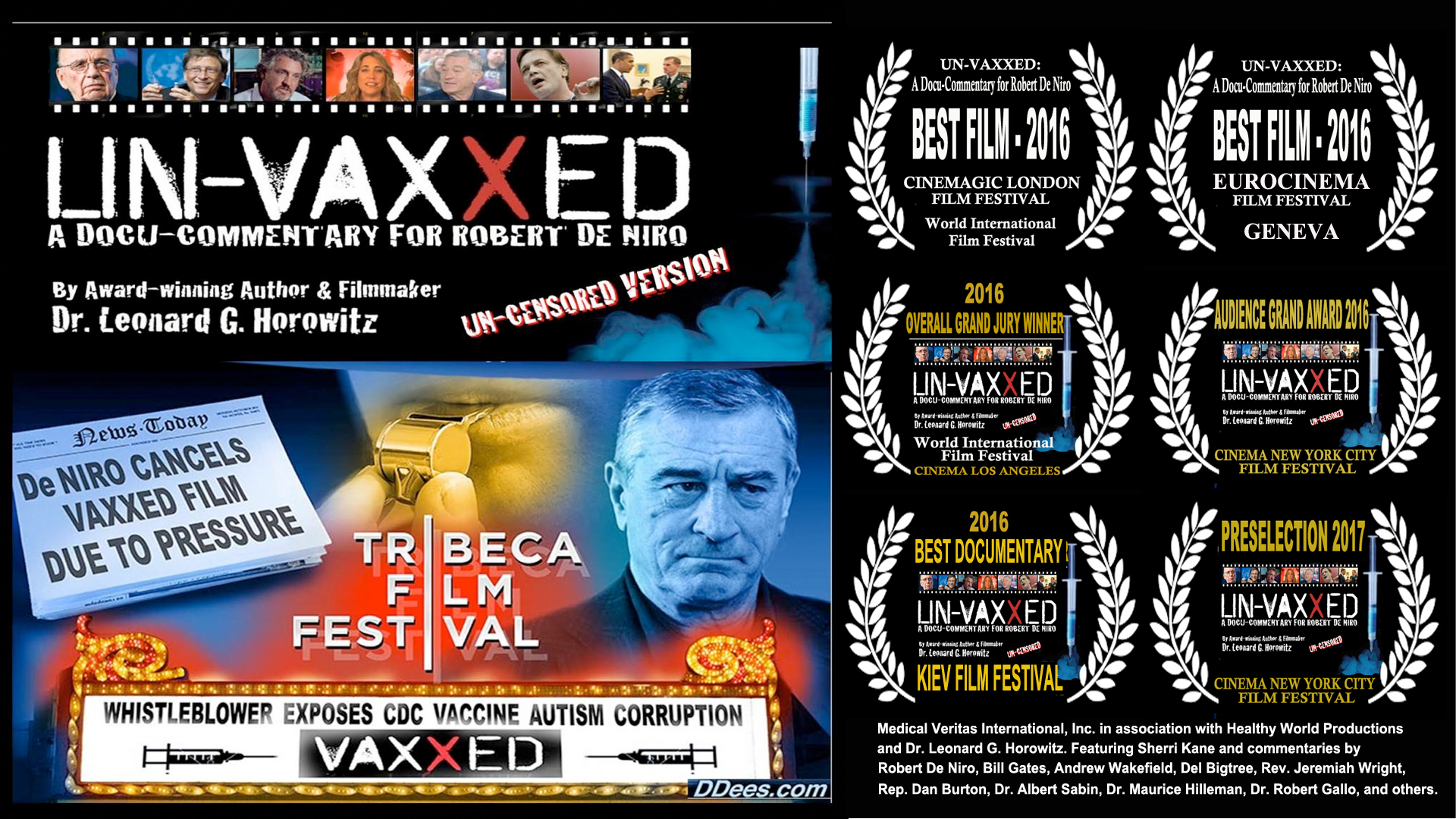 “Hogwash and VACCINATION GENOCIDE!” Dr. Horowitz responded. “That statement doesn’t make any medical sense, and legally it is a tacit admission of consumer fraud and genocide. Think about it. If this year’s flu shot targeting H3N2 that emerged first in Australia did not work, no reasonable person would think it would work in North America. Worse yet, they report 10 percent “efficacy,” but omit all the risks entirely. That’s consumer fraud. It’s also vaccination genocide because the high risks are killing and maiming large populations.”

And even worse than that, because the vaccines being spread along with the H3N2 viruses are unstable, they readily mutate, recombine with other circulating viruses, and could easily create an Ebola-like emergency killing a large percentage of the world’s population.

“But it’s al­ready clear that H3N2 will put it to the test,” continued the CDC’s propaganda.

“Quickly?” What is quickly to the CDC? Dr. Horowitz came out with this warning nearly two months ago. He did so simply using common sense and his medical intelligence. Apparently both are lacking in America’s premier health agency “controlling diseases” rather than preventing and curing them. Daaahhh!

“An­tivi­ral treat­ment should be started as soon as pos­si­ble af­ter ill­ness on­set and should not be de­layed even for a few hours to wait for the re­sults of test­ing,” the ad­vi­sory sa[id].

“There have been 7,000 con­firmed flu cases in the U.S. as of early De­cem­ber ­ dou­ble the num­ber of cases dur­ing the same pe­riod last year. About 78 per­cent of in­fluenza cases in the U.S. this year have been the H3N2 strain, ac­cord­ing to Irena Ken­neley, a board mem­ber of the As­so­ci­a­tion for Pro­fes­sion­als in In­fec­tion Con­trol and Epi­demi­ol­ogy.”

(FYI, that Association for Professionals in Infection Control and Epidemiology,” acronym “APIC,” is a manufacturers sponsored organization. The drug and chemical companies’ financing the organization “captured” it a long time ago when Dr. Horowitz was attending their meetings in his official capacity as the chief professional advisor for Henry Schein, Inc. In other words, APIC conceals its conflicting interests, making this CDC-industry advertisement fraudulent and unethical.)

“Peak flu ac­tiv­ity in the U.S. is usu­ally De­cem­ber to Fe­bru­ary,” the propaganda continued. “But the flu sea­son started early this year and H3N2 has been the pre­dom­i­nant strain, ac­cord­ing to Cherie Dren­zek, state epi­demi­ol­o­gist for the Ge­or­gia Depart­ment of Health.”

If that is true, and Dr. Horowitz’s Nov. 8, 2017 warning shows it is, then why didn’t Cherie Drenzek and her cohorts at CDC issue their warning earlier? Thousands of peoples lives, especially the elderly and frail children, might have been saved. Is this two months of negligence? Is this two months of manslaughter?

“One of the things we are very con­cerned about is that H3N2 is more se­vere in in­di­vid­u­als who are sus­cep­ti­ble: the el­derly, the very young, the im­mune com­pro­mised, preg­nant women,” Dren­zek said. “What we’ve seen so far in Ge­or­gia … in hospi­tal emer­gency de­part­ments the vast ma­jor­ity are lit­tle kids … (and) flu-as­so­ci­ated hos­pi­tal­iza­tions are peo­ple over age 50.”

“The H3N2 virus typ­i­cally is more se­vere, es­pe­cially for the older pop­u­la­tion and young chil­dren,” Flan­nery said. “So we’re wor­ried about that. If it’s a H3N2 sea­son, we’re wor­ried there will be lots of hos­pi­tal­iza­tions.”

Flannery’s “worry” evidences “naivety” at best, and complicity in the genocide at worst. With Flannery’s medical intelligence, and official experience working at CDC, she would or should know “lots of hospitalizations” generates Big Pharma’s big profits. Why be “worried about that?” Unless your parent or child ends up in one of those “death camps.”

Next came the carrot-on-the-stick–the fear message pushing the exclusive remedy in deadly vaccinations.

Rather than celebrating the mass awakening of society to the deadly risks from injecting poisonous GMOs, heavy metals, and toxic chemicals straight into your bloodstream, causing 62% of the more intelligent people to reject this vaccination genocide, the propaganda threatens the opposite.

“Ken­neley said the flu needs to be taken se­ri­ously. ­ It can lead to se­vere res­pi­ra­tory tract in­fec­tions and is spread eas­ily.”  What else is new?

“But how many of those people were immune compromised by drugs and vaccine-intoxications whacking the immune system?” Dr. Horowitz asks. This omission to get you vaccinated with poisons is fraudulent and criminal. “Conduct which forms a basis for inference is evidence. Silence is often evidence of the most persuasive character.” United States ex rel. Bilokumsky v. Tod, 263 US 149, 154 – Supreme Court 1923.

“It does pro­vide some pro­tec­tion,” Flan­nery said, again evading the widespread serious risks from getting vaccinated with anything.

“We see lower rates of flu in those that are vac­ci­nated.” Never mind the higher rates of autoimmune diseases, nervous system illness, and cancers.

Sherri Kane is an investigative journalist who defected from FOX News, Los Angeles, for ethical reasons before meeting Dr. Horowitz in 2009. She has co-authored many works with Dr. Horowitz since then, including Space Pearl Harbor and The Las Vegas Deep State Massacre. Earlier she wrote extensively on Barack Obama’s history, counter-intelligence methods used by Internet “gang stalkers,” and the “PharmaMedia,” detailing links between the wealthiest Wall Street investors in mass media and the pharmaceutical industry. Sherri also specializes in women’s and children’s health issues and child sex trafficking whistleblowing. She also advocates for animal rights. Ms. Kane is the Vice President of Medical Veritas International, Inc., that launched with Dr. Horowitz the LOVE/528 Revolution, 528Records.com, and the 528Radio Network impacting recording artistry and natural healing internationally. Online DVDs featuring Dr. Horowitz and Ms. Kane include: NSA/CIA Trolls Destroy Heroes to Profit Villains: Snowden/Wikileaks Evidence Protection Racket for the Death Industry.