The State financial records linked below evidence Sen. Baker misrepresented her valuable “iShares” of stock, concealing Blackrock, Inc, whose name she was to have disclosed on her campaign finance forms.

Investigators learned by examining State records that during Sen. Baker’s last election cycle, 2012-2014, more than $6,000 was given to her by the Capitol Consultants “aggregate.” That is at least $2,000 beyond the senator’s legal limit.

Even if a $1750 Pfizer donation was eliminated, the senator still exceeded the limit by at least $500.

“That may not seem like much,” explained investigative journalist Sherri Kane, “but if you speed only 6 miles beyond the limit and get caught, you still get a ticket and have to pay the penalty. Then, if you tell the officer a bunch of lies, while hiding drugs in your trunk, you may have to go to jail.”

Sen. Baker’s troubles are metaphorically similar. Her leading campaign donors are linked to three lies–misrepresentations on her financing statements submitted to the political oversight committee. These three misdemeanors conceal Blackrock, Inc., heavily invested in Big Pharma and Big Biotech that is trafficking “genetopharmaceuticals”–genetically-modified microbes, vaccines, and even mutant mosquitoes to fight dengue. 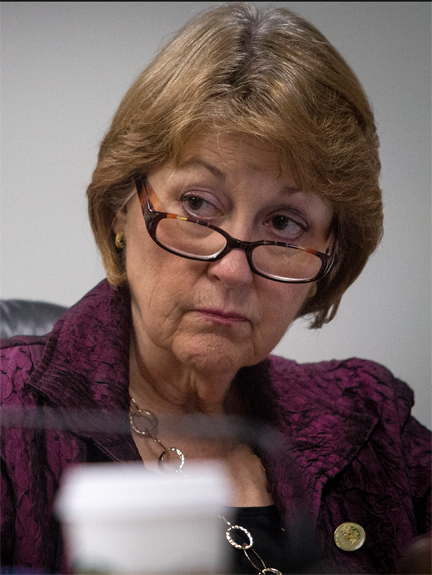 The political payoff scheme shows Senator Baker withholding the name of Blackrock, Inc. to conceal her knowledge that her more than a quarter million dollars in “iShares”—Blackrock securities–conflicted with her duty to protect consumers from drug industry special interests and Morris/Radcliffe’s powerful political influence. Under their scheme, bribery moved Baker to sponsor laws requiring mandatory vaccinations.

Radcliffe, who pushed for gambling casinos in Honolulu, works for three closely connected lobbying firms: Radcliffe and Associates — “specializing in legislative and executive branch advocacy at all levels of government;” Capitol Consultants of Hawaii; and G.A. Morris, the latter run by Radcliffe’s partner, George “Red” Morris.

The revealing documents evidencing Senator Baker’s misrepresentations and the Radcliffe/Morris bribes are downloadable below (online at JudicialCorruptionNews.com).

According to Hawaii Revised Statutes §11-412(b) any scheme to conceal such information in efforts to secret excessive aggregate campaign contributions for any election cycle would be a Class C felony.[1] That’s far worse than a traffic ticket.

Per Hawaii Advisory Opinion 05-01, State Election Officials must consider Federal Election Commission Rules (CFR 110.3) for adjudicating conflicts of interest; in this case, as to whether Morris’s and Radcliffe’s contributions were financed, maintained or controlled by the same entity–Capitol Consultants–on behalf of Blackrock/Pfizer/Monsanto.

The records show that the set of specious contributions were issued for the same amount, on the same day, by the two men, Morris and Radcliffe, concealing their complicity in the crime. This is key evidence to prove a campaign finance fraud conspiracy requiring FEC investigators to consider bribery. 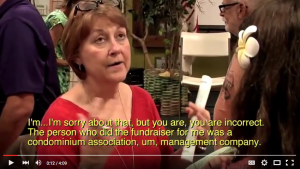 According to the investigators’ lead counsel, who asked to remain anonymous after discussing these matters with other lawyers and officials at the State of Hawaii Ethics Commission and Campaign Spending Commission, Sen. Baker’s incomplete, inaccurate, and potentially misleading filings should, by law, compel the Campaign Spending Commission to investigate the Senator for violations of Hawaii Revised Statute § 11-204 (f)[2]. This law covers Campaign Contribution Limits, with section 11-361 restricting aggregate contributions to no more than $4,000.

It would appear that Senator Baker’s campaign filings also violated HRS § 11-333 (2). At minimum, the lawmaker failed to exercise due diligence in ensuring contribution amounts were added correctly and source disclosures were not missing or, like Morris and Radcliffe, not compliant.[3]

The purpose in these important laws is to stop lawmakers from concealing their aggregate contributions, expenditures, and financiers with common interests that might sway elections, statutes, and the administration of government. Otherwise, voters could easily be duped, and citizens’ groups prejudiced by their inability to compete financially with lobbyists to gain political influence.

Fraud and Crime Headed for the Governor’s Signature

Senator Baker defrauded Hawaii voters and fellow legislators into believing that she served consumers’ best interests; when, in fact, the pending new laws restrict parents and health care workers from making decisions about vaccinations. As many as seven new vaccination laws have advanced during the past several months to prevent religious people and philosophical objectors from opting out of vaccination programs targeting children and hospital workers. These actions sharply conflict with civil rights and Constitutional doctrines first raised in Jacobson v. Massachusetts, which Dr. Horowitz insists must now be revisited in lieu of this emerging evidence of political corruption, consumer fraud, and “regulatory capture” at the CDC undermining vaccine safety and efficacy and the rationale behind “herd immunity.”

The pending legislation contractually compels vaccinations, but it is now void due to fraud, since fraud voids all contracts.

Many California voters are similarly calling for recission of SB 277 that Governor Brown signed before considering matters of consumer fraud by officials, such as Dr. Paul Offit, whose conflicting interests appear to influence the American Academy of Pediatrics that sets the childhood vaccination schedule. The increasing number of shots being increasingly opposed by doctors and educators have become a presidential election issue after Donald Trump objected to the now 49 injections of 14 vaccines recommended by age 6; 69 by age 18.

Governor Ige will be ethically-challenged to sign the bills sponsored in “bad faith” and passed largely through Senator Baker’s fraud and crime. Under the circumstances, the Governor’s duty is to block the legislation, or otherwise be complicit in the crime.

The governor must now lawfully direct Attorney General Douglas Chin to investigate and prosecute the violators on behalf of the State of Hawaii Office of Elections and Campaign Spending Commission, based on the clear and convincing evidence of fraud and crime confirmed by officials who conferred with investigators after examining the State’s records reprinted herein. 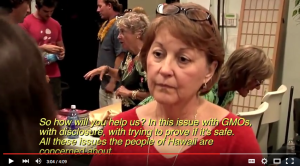 “Health scientists are required to openly divulge their conflicting interests,” Dr. Horowitz commented. “Fair play requires lawmakers to do the same. Citizens should not have to search through stacks of records and hire lawyers to discern conflicting interests and campaign financing violations. Legislators’ conflicts of interest should be made known, right up-front, especially concerning bills impacting public health and safety.”

The series of pro vaccination bills spurred by Sen. Baker’s financiers include SB 2316 and SB 2394, paired with House Bills 1722, 1910, 1945 and 1946. These were pushed by the Maui senator along with others who received Pfizer/Monsanto “graft” including: Josh Green, Michelle Kadani, Sylvia Luke, Suzanne Chun Oakland, Matthew Lopresti, Gil Keith-Agaran, Della Au Belatti and John Mizuno. Baker and Green received the lion’s share.

Nearly everyone expected the bills to pass both branches of government, and then gain Gov. Ige’s signature to become law. Now the legislation, by law, must be delayed by litigation(s) and criminal investigation(s).

Bribery is a Class B felony under Hawaii Revised Statute § 710-1040 (2011) [4] This means that lobbyists Morris and Radcliffe, Senator Baker, and possibly others, may go to jail for the damage they have done to good government and the public’s trust.

Editor’s Note: This matter of Blackrock, Inc.’s involvement raises related concerns unfolding on the Big Island of Hawaii where the release of genetically-modified mosquitoes is being considered in the wake of the dengue fever outbreak. See footnote [5].

CLICK Roz Baker’s Donors to view the senator’s campaign financing records showing excessive Pfizer/Monsanto contributions for 2012 to 2014 (i.e., the current financing cycle). Additional proof of the facts presented herein are provided in the final footnote, including links to related records and articles on Senator Baker. 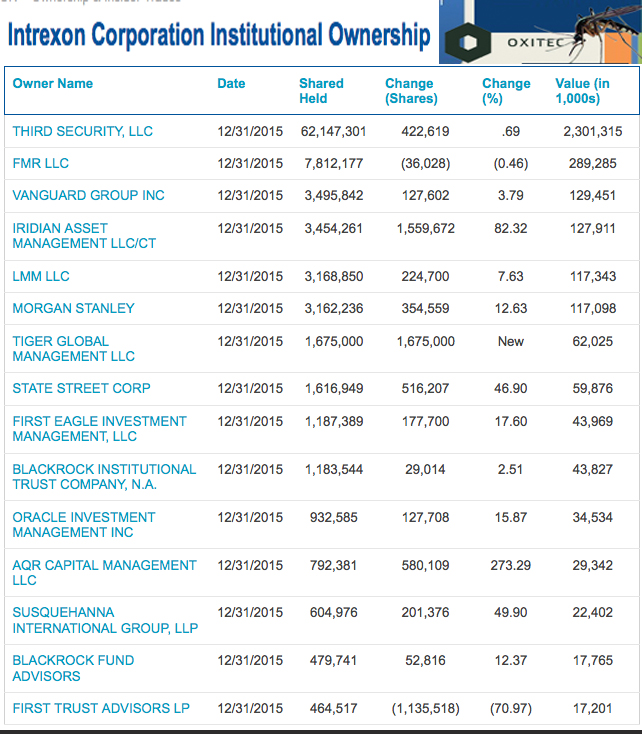 [3] Senator Baker failed to properly report, “[t]he cash on hand at the beginning of the reporting period and election period,” as required by law.

“What is most shocking to me is that Sen. Baker’s financiers at Blackrock, Inc.,” Horowitz said, “are partnered with top officials in the companies producing these poorly tested and very risky mosquitoes. The same corporate interests complicit in bribery in Hawaii financed the GM mosquitoes through the Oxitec company, initially to administer GM vaccines through mosquito bites. The enterprise’s genetically-engineered vaccine for dengue fever is now being tested, probably in mosquitoes as well as by using syringes. Their GM mosquitoes are already being promoted using graft recipients, including Hawaii Senate candidate Greggor Ilagan from my district,” Dr. Horowitz complained. “Ilagan (pronounced “ill again), along with Dr. Sarah Park of the State health department, are promoting the release of these risky man-made mutant insects.”

“That’s why I was very thankful, and impressed with, Director Oliveira’s colleagues who voiced their concerns to Councilman Ilagan. I had already informed Ilagan that Blackrock-affiliated GM mosquitoes produced by Oxitec produce unreliable and risky results that legislators, and even public health officials, have insufficient knowledge with which to govern or reliably consider. Moreover, regulatory capture at the CDC makes these decisions even harder. Couple difficult and conflicting science, and unreliable leadership at the CDC, compounded by this matter of bribery, and citizens are being assaulted by ignorance and political payoffs,” Horowitz explained.

“Fraud and crime voids contracts,” Dr. Horowitz repeated. “Legislators and health officials with conflicting interests in Big Pharma and Big Biotec can’t be trusted since, as you see from Senator Baker’s example, the corporations are obviously breaking laws, deceiving voters, and risking everyone’s health and safety.”

To watch Senator Baker lying at the Kihei Community Association meeting June 17, 2014, telling voters she has “not taken money from Monsanto in a number of years.” After the meeting, a Kihei resident, holding her baby, reminded the senator of the $500 a person fundraiser thrown for her by (then) Monsanto lobbyist Alicia Maluafiti, CLICK: https://www.youtube.com/watch?v=KIydY8a5KIo&feature=youtu.be

Senator Baker falsely filed the following shares of Blackrock stock in the fields in which she was to have named the company issuing the stock, not the stock itself. concealing her conflicting interests in large amount of assets:

Regarding the Senator’s “Ownership or Beneficial Interests in Businesses,” she was to have reported “the amount and identity of every ownership or beneficial interest held during the disclosure period by you, your spouse, or any dependent children in any business in or outside of the State where that interest has a value of $5,000 or more or is equal to 10% or more of the ownership of the business, including, but not limited to, stock. Report the complete name (not acronyms) of the business, the kind of activity the business is engaged in, and the nature of your, your spouse’s, or any dependent children’s interest in the business. If you, your spouse, or any of your dependent children is a shareholder of stock or mutual fund(s), you must report the number of shares owned or the approximate value of the stock or mutual fund(s). {Bold emphasis added.)

Republished as a public service by: