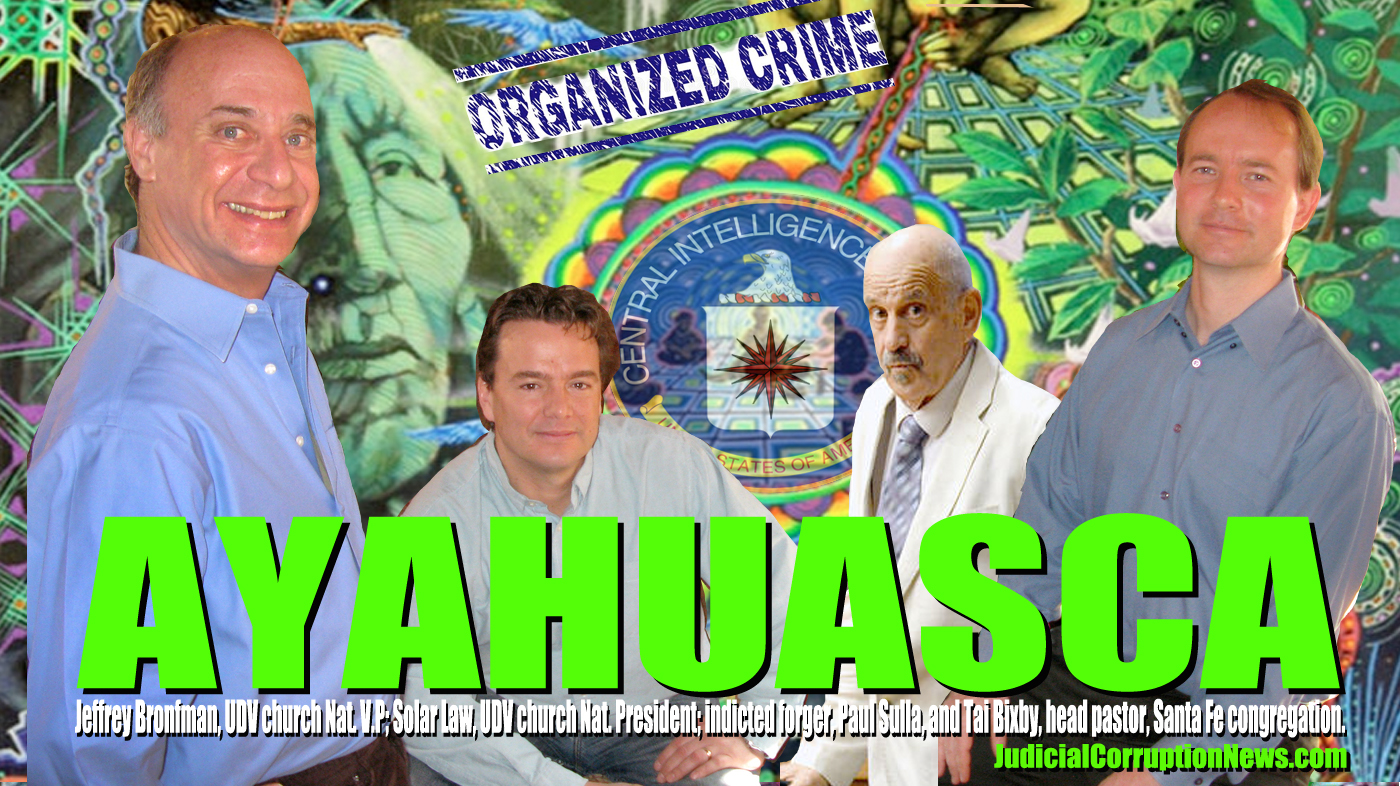 (MedicalVeritas.org, 1-21-20)–Jeffrey Bronfman made legal history, and established an exploding market, by paying lawyers to convince the US Supreme Court that “Ayahuasca” adulterated with the drug dimethyltryptamine (“DMT”) was central to the religious practices of indigenous people in Brazil. This article sets the record straight, and in the process vets the Bronfman crime family in another criminal enterprise. 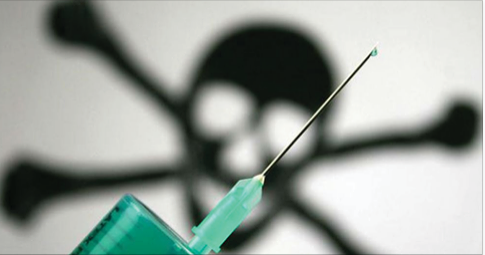 Ayahuasca, which is a “tea” prepared most-importantly from a vine called Banisteriopsis caapi, was traditionally used as an ‘analytic’.

The real history of ayahuasca can be found HERE. In brief, the so-called “religion” is based on so-called “lore” recalls explains the Bronfman crime enterprise before the courts.

Shaman would ingest ayahuasca in combination with another plant. The ayahuasca would provide the shaman with the knowledge on uses and properties of the second plants. So it was an “analytic.”

What made this work was several alkaloids in ayahuasca that act as monoamine oxidase inhibitors (MAOIs). MAOIs are required for some other drugs in plants to be orally active.

Of the thousands of plants ayahuasca was combined with, Psychotria viridis was one. This shrub contains the primary psychoactive ingredient dimethyltryptamine (“DMT”) in its leaves.

The ayahuasca – DMT combination was never considered central to traditional shamanic practice, but as one of thousands of plant combinations in the indigenous pharmacopeia.

It was not until the ’70s and early ’80s that ayahuasca-DMT became associated with “spiritual practice,” based on the writings and lectures of a cult hero named Terence McKenna. He and his brother Dennis, championed the use of DMT in all its forms.

Terence, who died of a brain tumor that he attributed more to marijuana smoking than to regular ayahuasca drinking, revealed that his ayahuasca promotions over the years had been in service to the U.S. Federal Government.

Terence had struck a plea bargain after getting caught trafficking hashish internationally. So he agreed to become the front-man in promoting this new ‘religion’. The financial incentives underlying this connection is made more clear below.

To McKenna, ayahuasca’s only function was an MAO inhibitor, allowing the DMT containing leaf to be absorbed at full potency into the body.

This focus turned the traditional ayahuasca practice upside down. Sincere shaman were appalled, because the focus on DMT and hallucinogenic voyaging missed the essence of the shamanic wisdom.

While the DMT leaf produced strong visuals and colors, this is much the same as an actual near death or real death experience when natural DMT levels rise in the brain.

This is how the ayahuasca vine imparts the more subtle ‘spiritual wisdom’ McKenna and his cult followers was missing, that was central to indigenous practitioners. 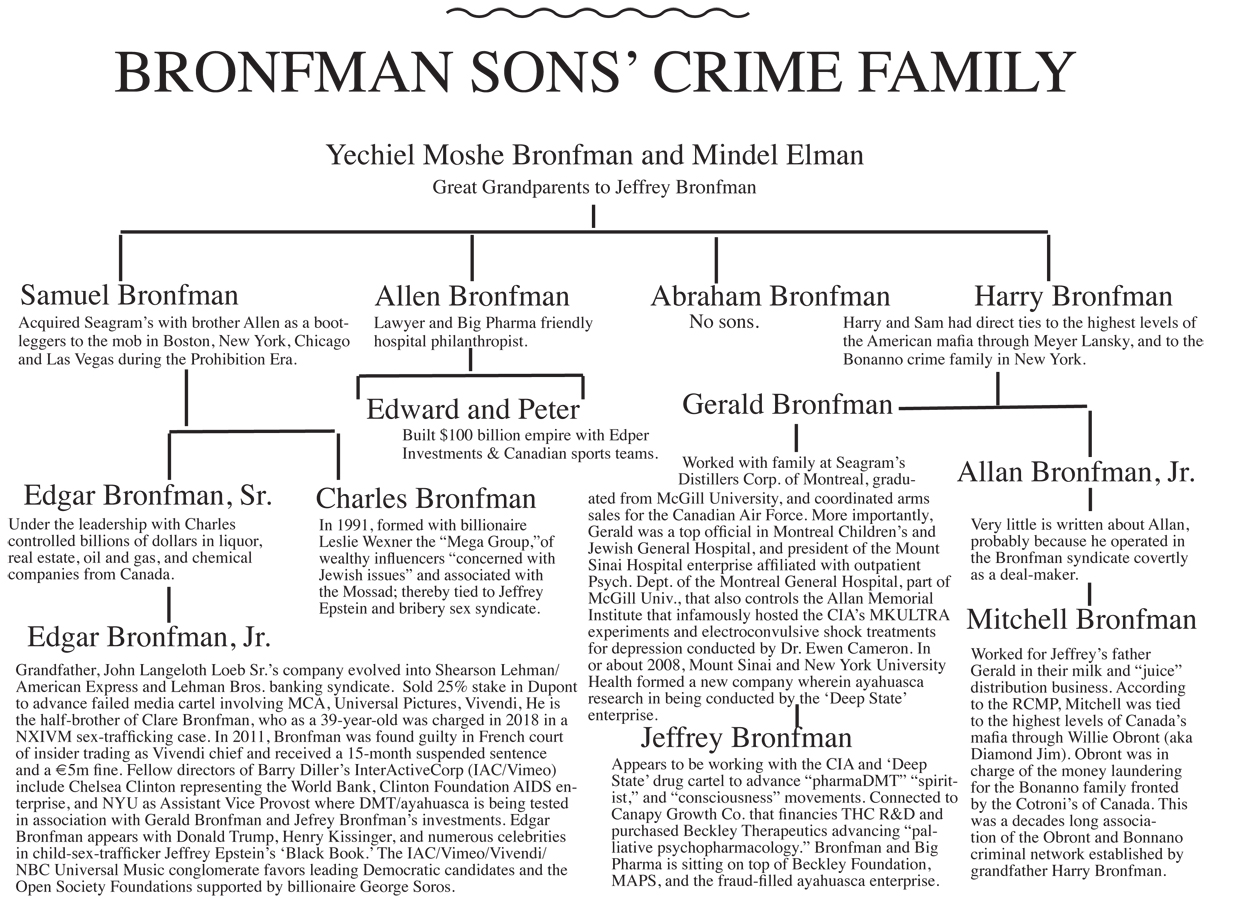 Samuel and Harry Bronfman took over the Seagram’s liqueur company and made themselves rich and famous. They built a criminal bootlegging enterprise that was unprecedented.

According to multiple sources, brothers Harry and Sam had direct ties to the highest levels of the American mafia through Meyer Lansky and to the Bonanno crime family in New York.

It was these connections that enabled the Bronfmans to establish their diversified criminal network centered on the distribution of illegal drugs. One of the Bronfman’s early tricks to circumvent prohibition was mixing alcohol into cough syrup and selling it as a medicine.

According to the book the Bronfman Dynasty, Mitchell worked for Jeffrey’s father Gerald in their milk and “juice” distribution business.

Mitchell interests also included other things. According to the Royal Canadian Mounted Police (RCMP), Mitchell was tied at the hip to the highest levels of Canada’s mafia through Willie Obront (aka Diamond Jim).

Obront worked for the mob and was in charge of the money laundering arm of the Bonanno family, fronted by the Cotroni’s of Canada.

Mitchell’s decades long connection to Obront and the Bonnano family was consistent with the criminal network established by his grandfather Harry.

While the exact extent of Mitchell’s criminality can only be guessed, the record shows that millions of dollars were exchanged between Mitchell and Obront for “private aircraft” services. And Mitchell assisted Obront in his efforts to defraud the IRS and tax authorities in Canada.

In one highly publicized caper, Mitchell created a false loan document claiming Obront owed him $350,000 when no such loan existed. This allowed Obront to evade paying taxes.

When Mitchell was asked why he created a fraudulent loan agreement, Mitchell claimed that Obront asked him to, but that he never asked Obont the document’s purpose.

Most nefarious was Mitchell and Obront’s joint ownership of the Pagoda North restaurant described by the FBI as the epicenter of continent wide bookmaking financed by the Genovese New York crime family.

Looking at Jeffrey’s efforts to distribute ayahuasca-DMT, through the lens of the Bronfman family’s history, another picture begins to emerge:

Harry distributed prohibited alcohol as medicine, to skirt the law. Is Jeffrey now promoting and distributing Schedule 1 DMT according to this same creative criminality playbook?

The parallels are striking…

Dr. Leonard Horowitz, D.M.D., M.A., M.P.H., D.N.M. (hon.), D.M.M. (hon.), is the author of twenty-two books, including the prophetically titled Death In The Air: Globalism,Terrorism and Toxic Warfare that came out three months before 9-11-01. That book deals with biological and energy weapons being used for population control. His three American best-sellers include: Emerging Viruses: AIDS & Ebola–Nature, Accident or Intentional? that was largely responsible for prompting explosive interest in vaccination risks and biological warfare; Healing Codes for the Biological Apocalypse, that revealed the ancient Solfeggio musical scale secreted for millennia; and Healing Celebrations: Miraculous Recoveries Through Ancient Scripture, Natural Medicine and Modern Science in which Dr. Horowitz presents his protocol for administering prevention and speedy recoveries. His text, The Book of 528: Prosperity Key of LOVE, has prompted a revolution in the music industry improving recording artistry and music therapy with the use of C=528Hz(A=444Hz) tuning that produces “medicinal music.” His most recent book, co-authored with Sherri Kane, is The Ayahuasca Death Cult: The Psycho-Spiritual Delusion.