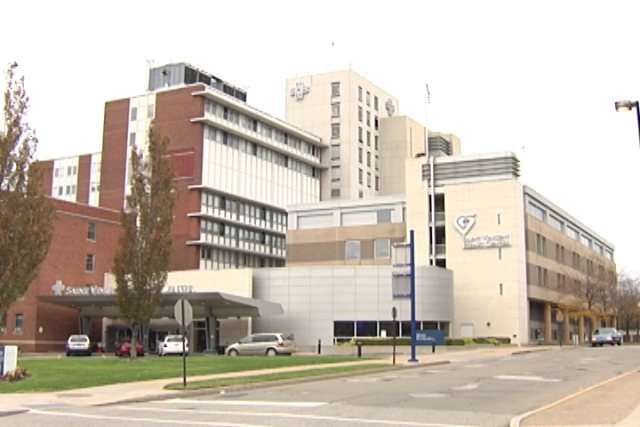 By David Bruce david.bruce@timesnews.comSaint
Vincent Hospital has agreed to rehire six former employees it fired after they refused to get flu shots in late 2013 and early 2014 due to their religious beliefs.The Erie hospital also will provide about $300,000 in back pay and compensatory damages to the employees as part of an agreement to settle a lawsuit filed on behalf of the workers by the Equal Employment Opportunity Commission in September. A consent decree that ended the case and detailed the settlement terms was filed Tuesday in U.S. District Court in Erie.The commission had claimed Saint Vincent violated Title VII of the Civil Rights Act of 1964 when it fired the six workers, who refused to be vaccinated after the hospital implemented a mandatory flu vaccination policy for all employees. The hospital granted medical exemptions to 14 other workers.”The consent decree filed this week between the EEOC and Saint Vincent Hospital does not constitute any admission of violations by Saint Vincent or a finding on the merits of the case,” Dan Laurent, a spokesman for Allegheny Health Network, Saint Vincent’s parent organization, said in an email. “Although we have vigorously and respectfully disagreed with the EEOC’s position and characterization of how employee claims outlined in this lawsuit were handled by the hospital, we have reached a resolution of the matter in the interest of avoiding the expense, delay and burden of further litigation on all parties.”

As part of the consent decree, Saint Vincent must pay the following employees back pay and compensatory damages:

In addition to providing the money, Saint Vincent must also offer to reinstate each former employee to their previous job with the same pay and benefits. If the job is not vacant, Saint Vincent must offer the employee a similar job if one becomes vacant over the next two years at any of the defendant’s facilities within a 50-mile radius of Saint Vincent.

Saint Vincent implemented the mandatory flu shot policy to receive the maximum reimbursement for treating Medicare patients. At least 95 percent of the hospital’s entire workforce had to be vaccinated to meet the requirements, Saint Vincent officials said in 2014 shortly after the policy went into effect. Saint Vincent said in February 2014 that 99.4 percent of its workforce had been vaccinated or received an exemption.

Those who sought a religious exemption for a flu shot were told they must provide proof of doctrine from an established religious organization. Several employees who provided letters from clergy were still denied exemptions by the hospital.

The consent decree states that Saint Vincent, from now on, “shall not require proof that an employee’s or applicant’s religious objection to vaccination be an official tenet or endorsed teaching of any religion or denomination.”

Saint Vincent, which was founded by the Roman Catholic Sisters of St. Joseph of Northwestern Pennsylvania, stopped requiring all employees to get a flu shot after it joined Allegheny Health Network, Laurent said.

This article is reprinted under fair usage doctrine for newsworthiness in the public interest. This news educates the public about their First Amendment right to assert religious exemptions for vaccinations.