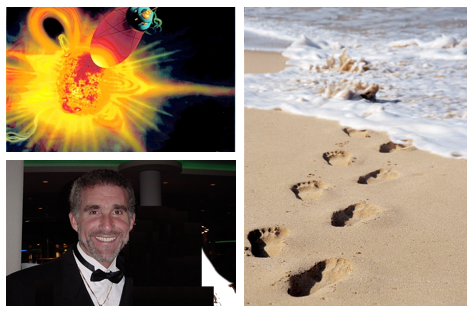 Shattering the Medical Paradigm with Rainbows and a Blade of Grass

I recently posted a video on Vimeo’s “Revolution Television Channel” that presents a “Natural Cure for Global Warming”–a theory on how to solve earth’s greatest environmental challenges, and at the same time remedy all chronic diseases. I theorized this can be safely and naturally accomplished by applying the simplest understandings about sunshine, water, electro-magnetism, and free energy.

The solution uses common sense as modeled by every blade of grass. Why is grass greenish-yellow? Why does it grow toward the sun? Why do its roots grow into the darkness for water and nutrients? And what can we learn from this?

Upon in-depth study, we must conclude that grass is greenish-yellow because that is the color generated by, incredibly, the pure tone of LOVE, broadcasting at the heart of the universe.

Think about this. The heart of the rainbow is, likewise, greenish-yellow—528nm of light. That is the color sunshine transmits (i.e., refracts) through the liquid crystal prisms of water we call “rain.” So we know, the heart of sunshine is about 528nm(+/-) of light.

And from Oriental Medicine, that predates modern “allopathic (drug-based) medicine” by nearly 5,000 years, your heart (chakra) resonates the same color, and central feeling or value of “LOVE/528.”

We know that this color of light sources from hydrogen explosions within the sun, and that the sun is composed of 100% hyrdrogen. (Actually, 98% hydrogen and 2% helium, which is two hydrogen atoms combined.) We also know that solar radiation—sunlight—transmits an electromagnetic color spectrum due to electrons flowing like solar flares from the sun, at the heart of which is 528nm—that greenish-yellow color of grass and the heart of the rainbow.

We also know that scientists measure hydrogen concentrations in the sun, and different levels or depths of the sun, using acoustic vibrations, like sonar sounds that echo back with data used for research. So the sun, you might say, is singing to the grass, and the grass is listening most intently at 528Hz/528nm, and reflecting this energy most powerfully to your eyes (the “windows to your soul.”)

NASA, in fact, recorded the sound of the sun, and their recording now plays on the Internet courtesy of David Sereda and yours truly. If you compare this recording with the sound of a 528 tuning-fork, or 528 tone-generator (also online at LOVE528.com), you can hear that the waffling of the sun sound centers around 528Hz.

So it is common sense and most reasonable to theorize the light at the heart of sunshine, 528nm, coincides with the heart of the sun-sound, 528Hz, linked to the outpouring of negatively charged electrons from hydrogen used by grass, and the entire botanical world, to produce oxygen.

NASA also proved the universe is full of water. Scientists discovered water beneath rocks on mars. Probing cameras in deep space filmed ice crystals filling what was once believed to be a “void.” The fact is, there is no empty space anywhere in the universe, except for theoretically “black holes,” or places where “zero-point” energy exists at the edge of cosmic creation (or the physical manifestation of the universe) according to astrophysicists.

Now even if you were to neglect the science called “Cymatics”—the study of sound’s impact on matter—which would be a foolish mistake, you would have to conclude that chlorophyll, the greenish-yellow pigment in grass, leaves, algae, phytoplankton, etc., selected this color to optimize energy conversion, planet earth’s primary energy reception, oxygen generation, life sustaining function.

And if you were to consider cymatic science, and honor the fact that your DNA operates energetically through sound and light (i.e., phonons and photons) signaling within a “water matrix” called “clustered water,” or “structured water,” you might be thrilled, because you might realize your “Divine spark” has actually been proven scientifically.

That is, all of organic chemistry reflects sacred geometry issuing acoustically from the sun and beyond, cosmically and miraculously. In the case of water—the “universal solvent”–Hexagonal-shaped molecules of H2O form star-like rings—snowflakes– when this fluid, a liquid crystal, is frozen. Then you would need to conclude, as I have, the hexagonal ring-shaped structure of chlorophyll, and blood hemoglobin, is generated fundamentally by sunlight, sun-sound, and the underlying musical-mathematical matrix of creation.

Physicists call this musical-mathematical matrix of creation the “quantum field;” whereas religious persons call this the Kingdom of Heaven. Either way, there is “nothing missing or broken” in this peaceful place, no strife, and no dissonance; only perfect order wherein the forces of nature in universal construction are balanced, and remain that way (i.e., in homeostasis).

Now you can begin to comprehend the intelligent design in every blade of grass; why grass is attracted to sunshine reflecting the heart of every rainbow. This way, the botanical world lives in harmony, and optimizes its blessing of solar reception to sustain life by generating oxygen filled with the electron-resonance of LOVE/528.

You breathe this oxygen, the second element in water, without even realizing this O2 carries the energy of 528Hz frequency, and 528nm of light, that is, the “prana,” or the “ha” in aloha. This is the “breath of life” resonating in LOVE/528 carried by your hemoglobin. And that hemoglobin is structured nearly identically to chlorophyll. The sacred geometry and organic chemistry of chlorophyll and homoglobin are so similar, in fact, that chlorophyll can be used for blood transfusions most effectively with minimal risk.

All of this is important to solving the world’s greatest problems, because your body, like our planet, is made mostly of water—hydrogen and oxygen—resonating with the energy of sunshine.

Intoxicating your body water (H2O) with chemical poisons, or polluting environments and our hydrated atmosphere with petrochemicals lacks common sense, or is stupid.  Energy industrialists continue to monopolize utilities, suppress alternative free-energy technologies, and make more money on diseases and the messy “clean-ups” they cause. Really, this is beyond stupid, this is psychopathic.

Relatedly, my “Natural Cure for Global Warming” theory holds that solar-flaring, and global-warming, is mainly resulting from acidification on earth, not simply cosmic forces beyond human control. This theory is based on the “blade of grass model” and the chemistry of water, reflected in the equation H+ + OH– = H2O. In this equation the negatively-charged electron (e-) carrying the greatest energy is attached to the oxygen (i.e., hydroxyl radical, OH–). The transferred electron carried by the oxygenated part of water leaves the single positively-charged hydrogen atom (H+). That H+ is the symbol for acid, central to the measurement pH, that stands for “parts hydrogen” or “the power of hydrogen.” I theorize that this simple water chemistry and “blade of grass model” holds the solution to what ails humanity, and our environment, caused primarily by the psychopathology of ignorance, arrogance, and greed. 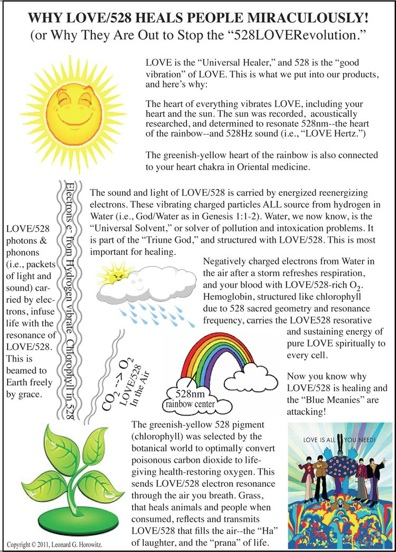 But the media diverts attention from this simple reality. The “military-medical-petrochemical-pharmaceutical-banking cartel” does not want it known that all chronic diseases, including cancers, neurological pathologies, infections and inflammatory conditions, auto-immune diseases, arthritic conditions, and more, commonly rely on acidification of body chemistry associated with “hypoxia”—lowered oxygen levels to exist.

You see, higher acidity and lowered oxygen levels go hand-in-hand. And from the chemical equation of water cited above, you can understand why. Electrons of LOVE/528 are carried by oxygen. Electrons neutralize acid (H+). So when oxygen is scarce, acids increases, breeding diseases and economic despair planet-wide.

To further prove this point, the illnesses mentioned above are all aggravated by common lifestyle risks: 1) caffeine; 2) nicotine; 3) stress; 4) alcohol; 5) pharmaceuticals; 6) refined carbohydrates/sugars; and 7) eating a lot of red meats. Each of these “risk-factors,” co-factors in disease, cause increased acidification of body chemistry, and reduce your oxygen levels and available energy electrons. So along with these conditions and lifestyle risks comes fatigue, depression, and diseases.

I theorize that this constant barrage of acid pollution of our bodies and planet is making more than wildlife and civilization sick. It is impacting the sun that, like the moon, is in delicate electromagnetic and gravitational balance with earth and our entire solar system. To balance this out, I theorize, the sun is broadcasting more electron energy in the form of negatively-charged radiation (i.e., solar flares) to neutralize the positively-charged acid all around us produced by the psychopaths—the energy industrialists—by their poisonous commerce.

Below is a graphic that depicts my theory:

In conclusion, my “Natural Cure for Global Warming” theory is paradigm shattering, especially for the fields of medicine and earth science.

Could it be that humanity will increasingly suffer from acid-related diseases, and our planet will likewise be damaged by petrochemical poisons, before civilization awakens to the simplicity of why grass is green with LOVE?

What will it take to learn this simple lesson about free energy for optimal longevity and sustainability?

Will this simple message of hope emerge to be celebrated by a critical mass of intelligent people who put a stop to the utility companies and automobile industry’s impositions that evidence insanity that is killing each of us slowly but surely?

The concept of a musical-mathematical hydro-sonic matrix of universal construction, the “blade of grass model” of loving nature, coupled with the energizing electrons from water and the sun, is fundamental to issuing technologies that can replace the energy cartel’s antiquated, arguably barbaric and psychopathic, nuclear and petrochemical industries.

Dr. Leonard G. Horowitz (DMD, MA, MPH, DNM, DMM) is an internationally known authority in public health, emerging diseases, and natural healing. Author of seventeen books, he is globally known as the most outspoken critic of the genocide he ascribes to the “military-medical-petrochemical-pharmaceutical cartel.”