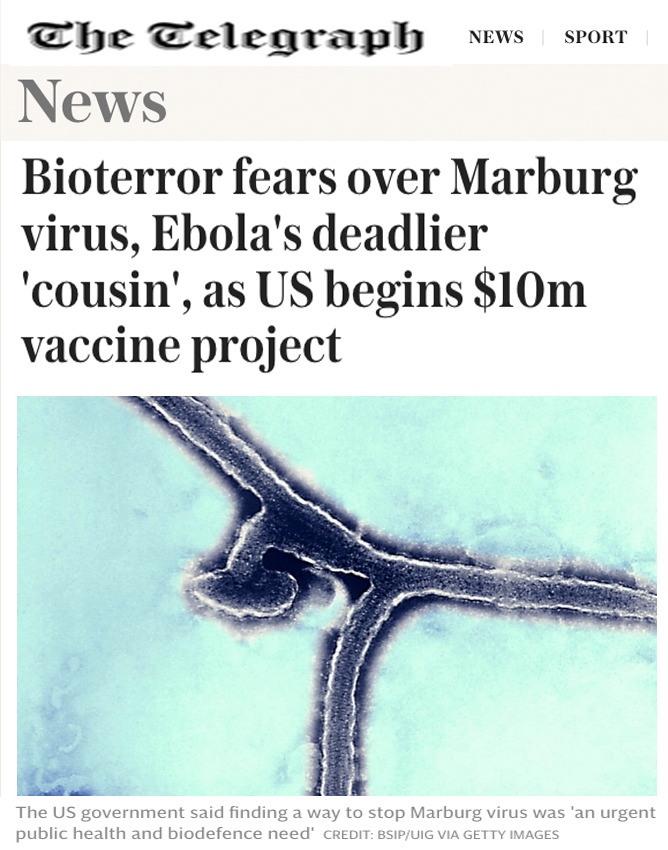 America has begun a $10m project making a vaccine to a deadly cousin of the Ebola virus considered a potential bioterrorism weapon.

Finding a way to stop Marburg virus is “an urgent public health and biodefence need”, the US government said.

The haemorrhagic fever virus has caused a string of deadly outbreaks in Africa since it was discovered in the 1960s. Several outbreaks have had high mortality rates, killing four-out-of-five infected.

“In addition to the threat of naturally occurring infection, the Marburg virus, like Ebola, is deemed a potential bioterrorism threat by the US Department of Homeland Security,” a statement said.

The US government’s Biomedical Advanced Research and Development Authority (BARDA) has awarded a two-year, $10 million contract to a Massachusetts-based biotech firm to work on the vaccine.

Public Health Vaccines will start with a promising potential vaccine already identified by the Canadian government.

The Canadian vaccine is still in pre-clinical stages of development and the contract aims to show producing the vaccine is feasible.

“If that initial development succeeds, BARDA has the option to provide additional funding for a total of up to $72 million to advance the Marburg virus vaccine through a Phase 2 clinical trial, and begin development of a vaccine candidate against the Sudan Ebola virus, a closely related virus, as well,” a statement said.

Marburg affects humans, monkey and apes and was first identified in 1967 when haemorrhagic fever outbreaks broke out simultaneously in laboratories in Marburg and Frankfurt in Germany, and Belgrade.

The laboratory workers all had contact with the blood, organs or cell-cultures from a batch of imported African green monkeys from north-western Uganda.

The outbreak then spread to relatives or medics caring for those infected. Seven people died. The most severe outbreak yet, in Angola in 2005, is thought to have killed 329 people, or 88 per cent of those infected.

America’s Centres for Disease Control lists Marburg virus and the closely related Ebola virus, as a category A potential bioterrorism agent, alongside killer germs such as smallpox, plague and anthrax.

The pathogens are considered high priority and a potential threat to national security because they spread quickly, have high mortality and have the potential to cause widespread panic.

Marburg virus survives inside the African fruit bat, Rousettus aegyptiacus. These cave-dwelling hosts do not show obvious signs of illness, but when primates become infected it can be highly lethal.

Recent outbreaks are thought to have jumped from animals to humans who had contact with bats, for example through droppings. Once humans are infected, they can pass it to through direct contact, often with medics or relatives.