Conscience and Constitution Violated by Vaccination Deception in New York: Opposition from the Association of American Physicians and Surgeons (AAPS)

Association of American Physicians and Surgeons

Judge Knipel stated that “a fireman need not obtain the informed consent of the owner before extinguishing a house fire,” and that “vaccination is known to extinguish the fire of contagion.”

Before the hearing, the criminal penalties—up to 6 months’ imprisonment—and the implied threat of forced vaccination had been removed, according to attorney Mary Holland of New York University school of law. Persons can be civilly fined $1,000 each for noncompliance, even if they have a religious exemption. The fine, according to Health Commissioner Oxiris Barbot, M.D., is “to enlist as many people as possible spreading the message that these vaccines are safe and effective.”

“[The] consequences for liberty are dire. [I]if government can track you down in your home and punish you, simply for withholding consent to be injected with a medical product that might harm you or violate your conscience . . . [this] violation of conscience or patient autonomy is not likely to be the last.”

Mayor De Blasio’s order is a big step beyond vaccine mandates for school, states Jane M. Orient, M.D., executive director of the Association of American Physicians and Surgeons (AAPS). It applies to adults also, who need not have or have been exposed to measles, but simply live in a politically designated area. The fines are huge, compared with the $5 penalty (about $125 in today’s dollars) imposed for failure to receive smallpox vaccine in 1905, the precedent for allowing states to override the need for informed consent. 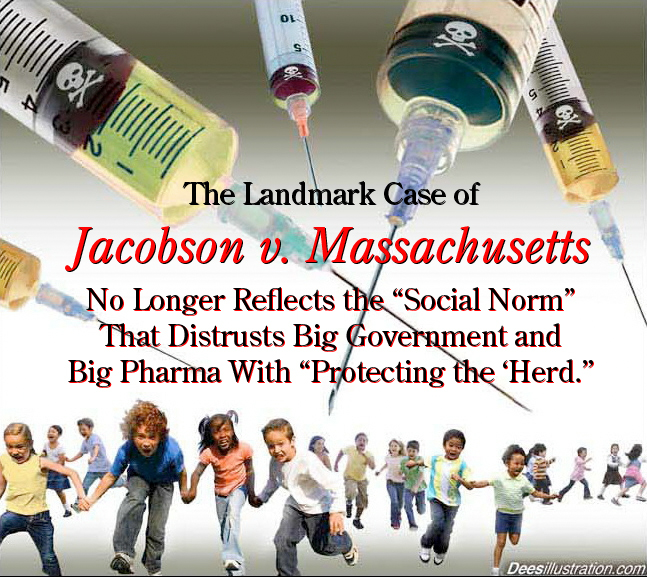 “In effect, people are being forced to pay what may be for them an extremely burdensome fine to exercise their individual liberty to refuse a medical treatment or to practice their religion,” she stated. “The fines are punitive, not educational, and they have nothing to do with vaccine safety or effectiveness.”

“The very fact that adults are getting measles shows that the Merck MMR vaccine is ineffective at conferring lasting protection,” Dr. Orient added.

“Moreover, measles is not remotely comparable to smallpox in lethality. There has been, according to the Centers for Disease Control and Prevention (CDC), one death in the U.S. from measles in the past decade, in 2015. [The CDC promotes the vaccination deception as a Big Pharma-‘captured agency.’]

The consequences for liberty are dire, AAPS warns, if government can track you down in your home and punish you, simply for withholding consent to be injected with a medical product that might harm you or violate your conscience. The first violation of conscience or patient autonomy is not likely to be the last.

The Association of American Physicians and Surgeons (AAPS) is a national organization representing physicians in all specialties, founded in 1943. Its motto is “omnia pro aegroto,” or “all for the patient.”

Jane M. Orient, M.D. is executive director of the Association of American Physicians and Surgeons and president of Doctors for Disaster Preparedness.

Jane M. Orient, M.D., has appeared on major television and radio networks in the U.S. speaking about issues related to healthcare reform. She is executive director of the Association of American Physicians and Surgeons, a voice for patients’ and physicians’ independence since 1943. She is also president of Doctors for Disaster Preparedness and chairman of the Public Health Committee of the Pima County (Arizona) Medical Society.

Dr. Orient is editor of AAPS News, the Doctors for Disaster Preparedness Newsletter, and Civil Defense Perspectives, and is managing editor of the Journal of American Physicians and Surgeons.