According to Amazon/Kindle and Wikipedia, this NFT investment celebrates the top-selling book in the field of “emerging viruses” and “communicable diseases” by celebrated whistlebower and science scholar, Dr. Leonard G. Horowitz.

“NFTs” are “non-fungible tokens,” that is, exclusive one-of-a-kind online items called “tokens” that are traded, sometimes by auction, providing a new and exploding financial security industry. According to Wikipedia, NFTs consist of “digital data stored in a blockchain, a form of distributed ledger. The ownership of an NFT is recorded in the blockchain, and can be transferred by the owner, allowing NFTs to be sold and traded.

This “Emerging Viruses NFT” is an exceptionally important and historic security celebrating the book and author that changed the world of science and politics concerning lab viruses, outbreaks, pandemics, biological weapons developments, and the use of genetic mutations in biowarfare for population control administered by ‘Deep State” financed agents and agencies. “Suspects” in the book include Dr. Anthony Fauci, the CDC, FDA and the National Institutes of Health, all in alliance with what Dr. Horowitz calls “the Military-Medical-Petrochemical-Pharmaceutical-Banking Cartel.”

No other books expose the depth of research and developments in this field most important to human health, safety and global security.

Your purchase provides one of only 100 “Emerging Viruses” NFTs numbered and autographed by Dr. Horowitz himself.

History on this Memorabilia provided by Celebrities

In 1993 through 1996, for nearly eighteen hours a day, six days a week, at the cost of more than $275,000.00, Dr. Leonard G. Horowitz researched and recorded the laboratory creation of HIV/AIDS, Ebola viruses, and a related assortment of biological weapons for inducing cancers, immune-suppression, and myriad diseases. 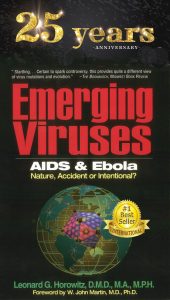 This is the book that in 2008 the controversial Rev. Jeremiah Wright cited in defense of his family and Barack Obama’s candidacy for President of the United States.

This is the book that CNN first reported on, then was directed by the CIA to censor Nick Sanchez in the “Situation Room” interviewing Dr. Horowitz on the man-made creation of AIDS and Ebola.

This is the book cited in the X-Files Movie just before Martin Landau’s Deep State character is assassinated for revealing the true lab origin of “these emerging viruses: AIDS and Ebola. . .”

This is the book explaining why “so many people of color are dying” according to the Honorable Elijah Muhammad, the founder of the Nation of Islam, as prophesied to his student, the Honorable Jabril Muhammad; including that Dr. Horowitz will come to evidence and explain the genocide.

This is the book that controversial celebrity Will Smith asked Warner Brothers to film in the movie I AM LEGEND, a story about the ‘zombification’ of the nation and world.

This is the book that top CDC officials cited as being the premier source of “Vaccination Hesitancy” in America and the world today.

This is the book that celebrity talk show host, Michael Savage, censored along with Dr. Horowitz’s debate against fraudulent “AIDS virus discoverer,” Dr. Robert Gallo scheduled by Savage, whose sister was killed by the hepatitis B vaccine given to mentally-retarded children at Willowbrook and gay men in Greenwich Village, New York.

This is the book that the People’s Republic of China exclusively authorized, for their military and media to gain Anglo-American intelligence for the creation of viruses for biological warfare.

And this is the book that preceded COVID COUP: The Rise of the Fourth Reich, by Dr. Horowitz also censored by Big Tech Media. 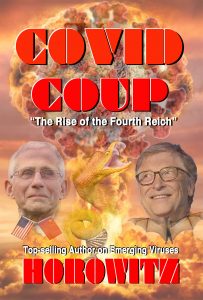 That’s right, by 1996 Dr. Horowitz had published the hard, cold, government records proving the lab creation of HIV/AIDS and Ebola-like viruses. These included the military and National Cancer Institute’s contractors’ contracts published in this book that proves (beyond any reasonable doubt) that AIDS was “man made.”

The Deep State bankers–investors in profitable population control through vaccines and drugs hate this book and Dr. Horowitz too. This is the book that caused him to be targeted relentlessly by CIA and FBI agents that the doctor calls a “racketeering enterprise,” and decrees is the “National Security Crime Syndicate.”

“The flak only gets heavy when you’re over the target,” Colonel Bo Gritz advised Horowitz. America’s most decorated war hero, Gritz, was referencing the attacks against the doctor and humanity. Attacks waged by Deep State players that this book uniquely identifies.

This is the book that national security insider, Col. Jack Kingston (whose vitae includes a 1995 nomination to the Office of the Joint Chiefs of Staff as a Strategic Planner for the Pentagon), The Past Chairman of the National Security Advisory Board in Washington, D.C., Col. Kingston wrote, “In my estimation he [Dr. Horowitz] has unearthed a covert operation run amok, that is bigger than any secret operation in U.S. history, and more momentous in it’s implications to humanity than the atomic weapons ‘Manhattan Project’ of World War II.”

“So far a Nobel Prize hasn’t been awarded to Dr. Len Horowitz, but it should have been,” Col. Gritz attested after reading Emerging Viruses: AIDS & Ebola–Natuire, Accident, or Inteional?. “His book is impeccably researched and his information is vitally important.” In fact, he said, “Dr. Horowitz relays the most provocative and important information in the world today.”

INVEST IN THIS NFT VALUABLE PIECE OF HISTORY!

There will be only 100 of these NFT made available. Each will be numbered and signed by Dr. Leonard G. Horowitz. The purchase may be made with Etherium.

Your investment in this NFT is historic because of the psycho-sociology surrounding pandemics and vaccinations. Attitudes and social behaviors has changed dramatically in recent years. Much of these changes that are historic were caused by Dr. Horowitz and his multimedia promotions of Emerging Viruses: AIDS & Ebola.

A great battle is being waged against this book.*

* Chief opponents of this book have cited forensic evidence of fraud rampant in health science. They then disclaim virus isolations, duplications and verifications. “Viruses have never been isolated!” they argue.

The detractors’ reasoned arguments lose credibility on deep investigation. The naysayers’ thesis is controverted by millions of people who have not been damaged by vaccines and drugs (i.e., clearly the un-vaccinated masses).

Millions of people acquired and succumbed to some strange new respiratory flu-like disease beginning December thru January 2020.  That illness was later called “COVID-19.”

Was it a virus?

Was it an Anglo-Asian creation for Deep State depopulation?

Was it a non-virus antigenic-protein prompting autoimmune diseases?

Or was it all of the above causing respiratory distress in healthy, un-vaccinated, not drugged, people?

This book’s naysayers ask, “Have all of the pandemics been artifacts of propaganda?”

This book is affirmed by all enlightened investigators, establishing this book’s historic and historical value.

This book established: “The germ is nothing; the terrain is everything!” unless compromised by biochemical warfare waged upon We The People.

Make your investment in this valuable NFT right now!