Heard on All Things Considered 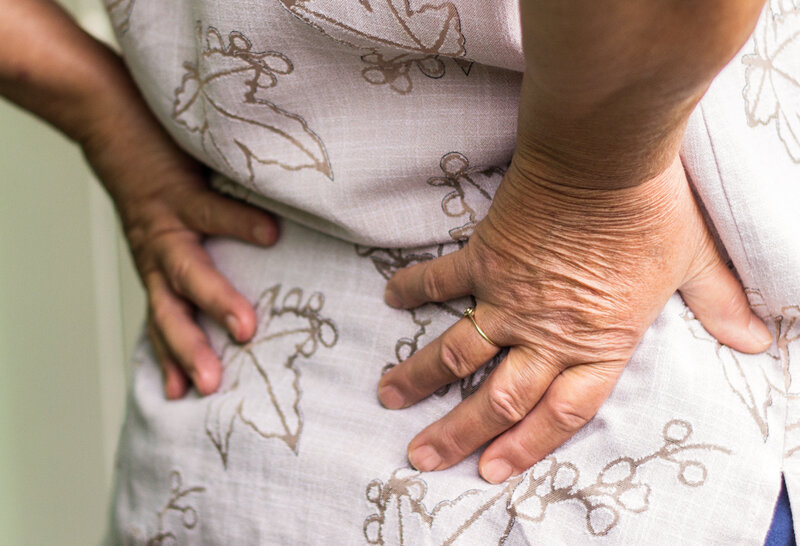 You may balk at the pompousness of Dr. Richard Deyo as you read the Journal of the American Medical Association (JAMA) editorial below, or the transcript of the publicity it received from National Public Radio (“NPR”). Albeit it is public knowledge that “NPR” is a pharmaceutical-industry “captured” liberal [i.e., purportedly “anti-fascist”) propaganda mill.]). Hypocritically, the “educational ‘service'” identified the author as “an internist and professor of evidence-based medicine” at the Oregon Health and Science University. Deyo wrote the editorial to accompany the published study, purportedly to legitimize “evidence-based” science, but clearly to wipe the egg-off-the-face of “modern medicine.”
Reasonably intelligent readers can discern this yellow press. It lacks “evidence-based” common sense for the following reasons:
The promoters’ financiers transparently compete against Deyo’s target–the natural healing industry. Accordingly, Deyo’s opinion smacks of discrediting ignorance and prejudice against the natural healing arts and sciences. Deyo subtly smears chiropractors and others with dogma upon which medicine’s pride and monopoly has fallen.
It seems unconscionable to me that Deyo, a “master of public health,” would so ignorantly or maliciously express his pseudo-scientific bias, tainting each reserved admission with his first sentence conclusion, “no single treatment is clearly superior [for back pain].”
Deyo’s politically-correct conclusion is objectionable for two more reasons. First, it contradicts the dogma preached for the last century by “science” that has claimed drugs are superior to faith healers and chiropractors; and (2) it omits and neglects the most superior power of faith-based spiritual (energetic/electro-magnetic) practices that include chiropractic (according to the profession’s founding principles pioneered by spiritualist, Daniel David Palmer.)
“Spinal manipulation therapy (SMT) is a controversial treatment option for low back pain, perhaps in part because it is most frequently administered by chiropractors,” Deyo wrote.
What about upper back pain or mid-back pain? Is chiropractic better for that? Not according to Deyo.
“Chiropractic therapy is not widely accepted by some traditional healthcare practitioners,” Deyo espoused. “This may be, at least in part, because some early practitioners of chiropractic care rejected the germ theory, immunizations, and other scientific advances.”
The fact is, the best educated chiropractors today still reject “the germ theory,” realize that “immunizations” occur naturally by natural exposures, not needle injections of toxic GMOs preserved by heavy metals and toxic chemicals.
Additionally, chiropractic only became “controversial” due to Abraham Flexner’s consumer fraud that accompanied his financiers’ profitable, petrochemical-pharmaceutical, Anglo-American, white-supremacy, eugenics agendas. (i.e., “Let’s genetically engineer super-immunity against germs for a superior human race.”)
Notice Deyo’s subtle cunning plug claiming “the germ theory [and] immunizations” reflect “scientific advances” not simply Rockefeller/IG Farben, Bayer and Merck’s common propaganda and commercial agenda. 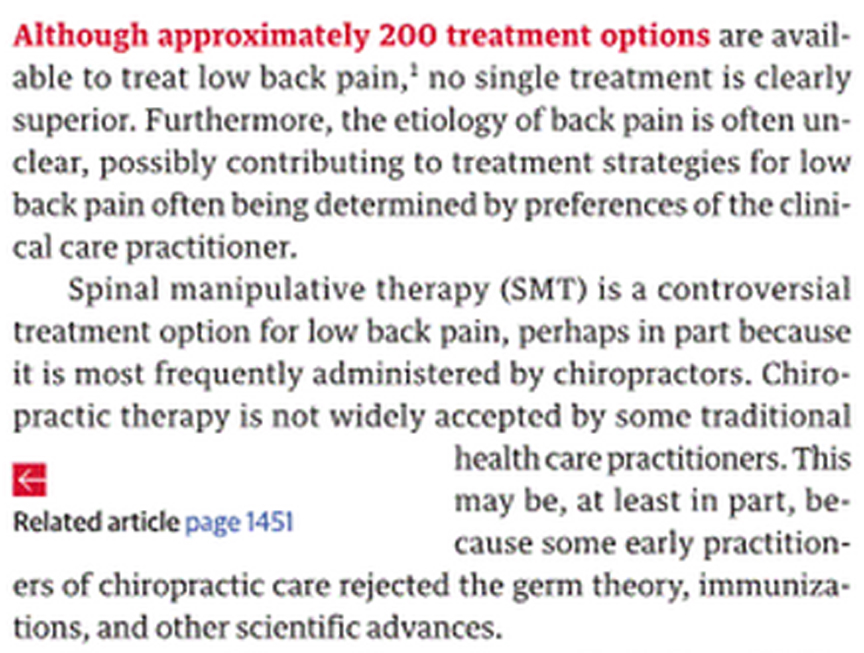 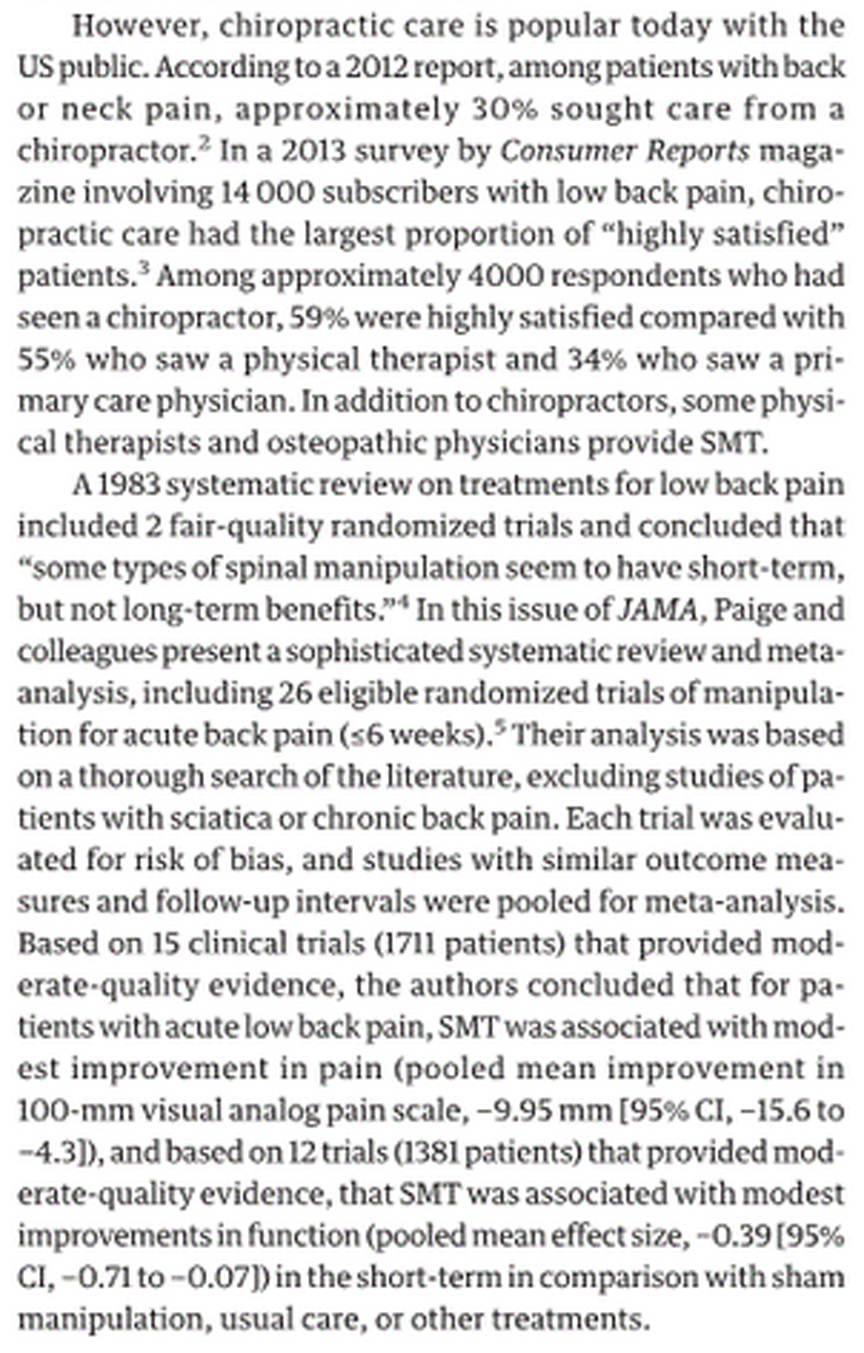 Incongruously, Deyo wrote, “physicians infrequently recommend SMT . . . [due to] uncertainty about its biological rationale. It remains unclear how SMT relieves back pain, . . .”  Yet, Deyo adds more than a half dozen “biological” reasons for chiropractic’s benefits.
The NPR broadcast (transcript) misrepresents Deyo’s facts even worse.
Summarily, Deyo’s lame attempt to wipe the egg-off-the-face of “modern medicine” is further white-washed by NPR’s fraudulent misrepresentations to get sick people to try natural alternatives in an era of Obamacare’s un-sustainability.
In both publications, Deyo’s and NPR’s, the “pharmawhores” neglect the most superior spiritual/energetic/electromagnetic “rationale” and mechanism for pain relief. This neglected “alternative” is beautifully chronicled in the film Facing Darkness by the Christian organization, Samaritan’s Purse. The epic crisis “Ebola story” of Dr. Kent Brantly documents the power of “only faith, determination, and prayer [that] moved mountains,” and honored “God [who] performed [the healing] miracles!”
In conclusion, “modern medicine” needs to “get a grip” on reality. Healing is based on physics, metaphysics, and spiritual dynamics about which brainwashed medical doctors are precluded from studying, honoring, and practicing. These sciences include electro-genetics, cymatics, bioacoustics, and electron resonance fundamental to organic chemistry, physiology, metabolism, modern nuclear magnetic resonance imaging technologies, and life on earth “as it is in heaven.”
It is pseudo-science expressing commercial bias that is discrediting medicine, well evidenced in Deyo’s article and NPR’s spin.
______________________________
The NPR Transcript:

Now, research published Tuesday in the Journal of the American Medical Association offers the latest evidence that spinal manipulation can offer a modestly effective alternative.

Researchers analyzed 26 studies involving more than 1,700 patients with lower back pain. The analysis found spinal manipulation can reduce lower back pain as measured by patients on a pain scale — like this one — from zero to 10.

Spinal manipulation, which is typically done by chiropractors, physical therapists, osteopaths, massage therapists and some other health providers, involves applying pressure and moving joints in the spine.

Patients undergoing spinal manipulation experienced a decline of 1 point in their pain rating, says Dr. Paul Shekelle, an internist with the West Los Angeles Veterans Affairs Medical Center and the Rand Corp. who headed the study.

The study also found spinal manipulation modestly improved function. On average, patients reported greater ease and comfort engaging in two day-to-day activities — such as finding they could walk more quickly, were having less difficulty turning over in bed or were sleeping more soundly.

It’s not clear exactly how spinal manipulation relieves back pain. But it may reposition the small joints in the spine in a way that causes less pain, according to Dr. Richard Deyo, an internist and professor of evidence-based medicine at the Oregon Health and Science University. Deyo wrote an editorial published along with the study.

Another possibility, Deyo says, is that spinal manipulation may restore some material in the disk between the vertebrae, or it may simply relax muscles, which could be important.

There may also be mind-body interaction that comes from the “laying of hands” or a trusting relationship between patients and their health care provider, he says.

Deyo notes that there are many possible treatments for lower back pain, including oral medicine, injected medicine, corsets, traction, surgery, acupuncture and massage therapy. But of about 200 treatment options, “no single treatment is clearly superior,” he says. The findings of this study may slightly shift that evaluation of benefits. 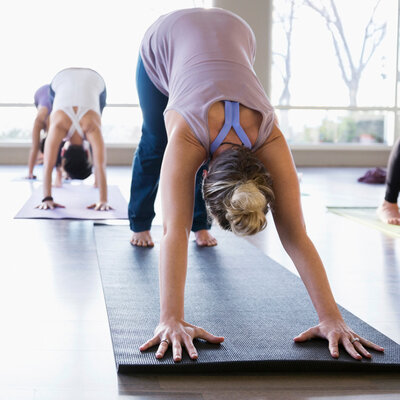 Got Back Pain? Try Yoga Or Massage Before Reaching For The Pills

The findings are in line with guidelines the American College of Physicians released recently. Those guidelines suggest people with low back pain use techniques that may help speed up the healing process, including heat wraps, massage, acupuncture and spinal manipulation. The bottom line message, says Deyo, is to try to avoid medication.

“Even over-the-counter medications have some important side effects and complications,” Deyo says. “Spinal manipulation seems to be quite safe when it’s done in the lower back.”

Medications can cause gastritis, an upset stomach and a rise in blood pressure. And if patients are prescribed stronger medication, such as opioids, they risk long-term use and even addiction.

Dr. Steven Atlas, an internist and associate professor at Harvard Medical School who practices at Massachusetts General Hospital, says the study offers “more support for alternative treatments,” particularly for patients who are not getting better with self-care techniques such as heating pads, exercise and yoga.

Atlas says further research could help identify patients who would benefit most from spinal manipulation therapy. This could make it easier for doctors to refer patients for treatment by a chiropractor or physical therapist, he says.